Here at Old Hall, a beautifully located caravan park in Lancashire, we are dedicated to conservation; ensuring that our park can be enjoyed by our guests year after year. In this blog, we look at some endangered plants that need to be protected due to their potential extinction, as well as the efforts of our staff who maintain the grounds around our holiday homes in Lancashire.

The ghost orchid is one of the rarest plants in Britain, perhaps even the world. It is considered critically endangered and regularly blinks out of existence – only for a new one to suddenly appear without warning.

This orchid is one of the more delicate variants of the orchid family and can be identified by its gentle crimson stems and translucent white blooms. Curiously, this rare plant has no leaves to help it attain vital nutrients and instead relies on its roots.

This orchid has something of a reputation with sudden appearances across the nation. There’s no telling where it might appear next, but there’s a good chance we won’t see it again for a full decade, maybe two. The following video will show you this rare flower in bloom:

The most recent blooms were spotted in the 1950s, then the ‘80s, and lastly in 2009 after the plant had been declared officially extinct in 2005. Could there be a chance that a ghost orchid could surface at our caravan park near the Yorkshire Dales? We certainly hope so!

The ghost orchid isn’t the only type of orchid which is considered rare in the UK as the red helleborine is also considered critically endangered. This plant grows almost exclusively in the south of England, though it can be found elsewhere in Europe.

It would certainly be a loss for our country to lose this delicate plant with its soft pink blooms. It is mostly found in shaded broadleaved woods and flowers between June and August. The Kew gardens are hoping to have success in artificially propagating the plant following the collection of some seeds in recent years. 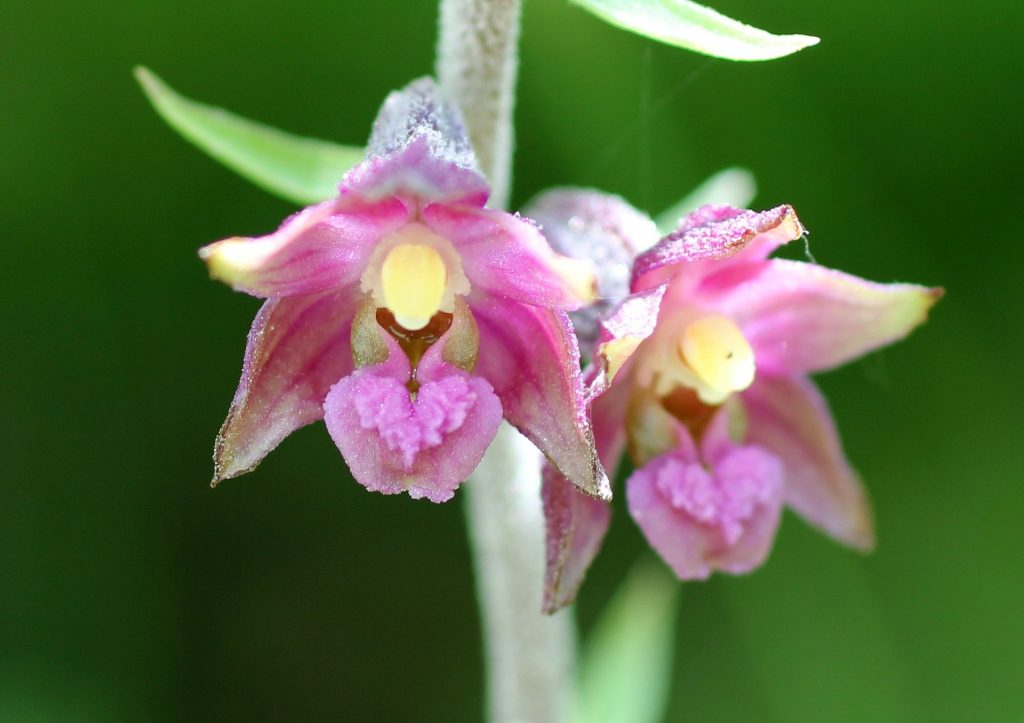 Less rare than red helleborine, this bloom is currently in a vulnerable position in the UK. This means that it could still be saved if recognised and protected. The crested cow-wheat is a parasitic plant, like the ghost orchid, but it is also very attractive.

You might find this herb creeping on road verges or below hedges between July and August, and its decline is linked with the reduction of wood coppicing which is when a young tree is cut back to help promote its growth. Neglecting woodland management is causing problems in more areas than many would like to believe.

Crested cow-wheat also grows in some areas of Finland, but quite commonly on the Åland Islands.

The bluebell is described by the National Woodland Trust as one of our nation’s best-loved wildflowers, and we certainly agree with this statement. Bluebells are threatened by habitat destruction, unlawful collection and cross-breeding with non-native flowers – this means that whilst on the grounds of Old Hall, you should take extra care to enjoy these beautiful flowers without disrupting them.

Our bluebells are protected by the Wildlife and Countryside Act (1981) which prohibits anyone from digging up bulbs in the countryside, but we’re not sure why anyone would want to cause damage to our beautiful blue woodland carpet:

There are some interesting facts about bluebells that you may not have known such as; it can take at least five years for a bluebell seed to grow into a bulb, and if you’re lucky enough – as it’s incredibly rare, it’s possible to find an ‘albino’ bluebell which are white due to their lack of the famous blue pigment.  Bluebells were also an important resource for academia in the Bronze age, as people used to use the sap to bind pages into books.

Bluebells are at their best between mid-April and late May so make sure to visit our caravan park near the south Lakes over this period for a truly stunning show of natural blooms. We have received the David Bellamy Gold Conservation for our success in managing our land in a wildlife-friendly manner and we don’t plan to stop anytime soon.

This entry was posted in Nature, Plants. Bookmark the permalink.
Other categories
Recent posts